There’s always a debate on which time zone is best for sports and it is a fluid conversation depending on the circumstances. If you’re the type of person who must see the puck drop or the first pitch but you live on the west coast and work a normal 9-5 job, then Pacific Time can sometimes be an inconvenience. However, there is nothing worse than living on the east coast, watching your baseball team play a night game on the west coast that goes extras, while attempting to write your very first game recap. Tonight, that person is me and I should have gone to bed hours ago. But alas.

Game 3 of the series against San Diego is in the books which resulted in a 2-1 victory for the Padres. Both Michael Wacha and Tyson Ross pitched well; both got little help from their offense, and in Wacha’s case, he didn’t get much help from his defense either. In the bottom of the 2nd, Greg Garcia made a great play at second to rob Freddy Galvis of a hit. Problem is, José Martínez then whipped the ball to third base to try to catch an advancing Freddy Galvis only his errant throw got past Jedd Gyorko allowing Galvis to score the first run of the game.

Here’s a question (eventually): Martínez is awful in the field. That’s something I think we all agree on. Defense matters but not as much as offense so his deficiencies were very tolerable when he was hitting everything in sight the first month of the season. But now that he has cooled off, how low of an OPS can he maintain before it’s time for him to take a seat every now and then? How about .800? Because that’s about where he is right now. What happens if he drifts below .750? This feels like a conversation that is going to be had down the road.

Of course, after I wrote this, Martínez got hits in his next two at-bats including a double in the 6th which plated Paul DeJong and put the Cardinals on the board, so maybe that will table any talk of this for a bit. That tied the game at 1. It would stay that way for a while.

And here’s another unrelated question: Yay or nay on the 90s throwback Tony Gwynn-style uniforms? 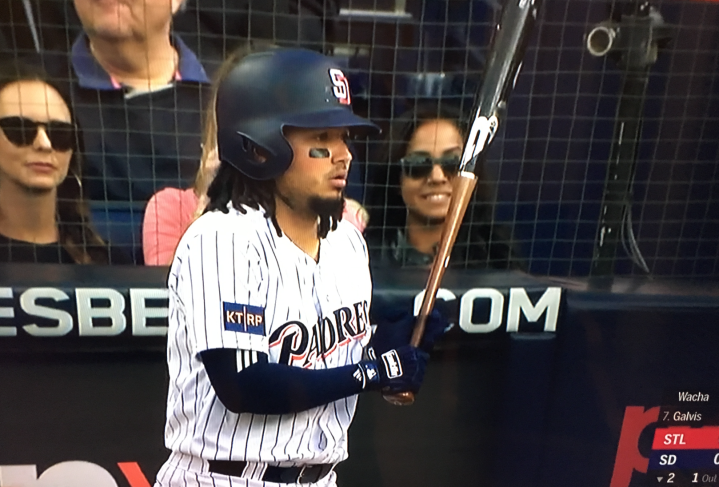 No one thinks Padres when they hear pinstripes but I always thought they were fine. They are certainly better than the bland look the Padres have sported for the last several years, but I have yet to see a reason as to why they shouldn’t return to their yellow and brown roots from their Winfield/Ozzie days on a full-time basis.

Anyway…not sure why (although probably because it’s the Padres) but this felt like a game the Cardinals would eventually win and the 8th inning started promising enough. With the score still tied at 1, DeJong led off the inning with a hit the opposite way, but it was for naught as Martínez promptly grounded into a double play. Marcell Ozuna then hit a liner straight up the middle for a hit, Gyorko walked, and it looked like the Cardinals might have something going again. Dexter Fowler then put together a good at-bat if measured by actual seconds spent in the batter’s box but that’s because there was a slight delay when this happened.

(Christian Villanueva somehow stayed in the game. Fowler then struck out to end the inning. He is still struggling)

The Padres had a good chance to win in the bottom of the 9th when Jose Pirela led off the inning with a single off Bud Norris, and Franchy Cordero followed with a walk. However, Cory Spangenberg failed in his attempt to move the runners over and bunted foul with two strikes. The locals were not happy and I don’t blame them. Norris then got out of the jam by striking out Raffy Lopez and Galvis.

The Padres had another thing going in the bottom of the tenth when Sam Tuivailala let Carlos Asuaje and Travis Jankowski reach base with one out. Enter Brett Cecil. Eric Hosmer then grounded to third which Gyorko turned into a nifty 5-3 double-play. Jedd is due-up to start the 11th. He should homer so I can go to bed soon.

He singled instead. We’ll take it. Later, with two outs, Greg Garcia drove Gyrko to third with a single to right. That set up Kolten Wong, who was pinch hitting and after working the count full he flied out to deep right. I’m tired so unless something truly noteworthy happens, the very next sentence will include how this game was won, be it the 11th inning or the 211th.

In the bottom of the 13th inning, Eric Hosmer doubled off of Mike Mayers to score Jordan Lyles. Game over. 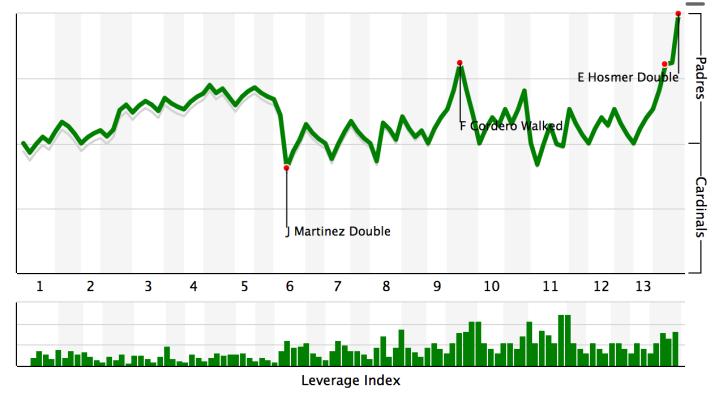 Tomorrow is the fourth and final game of this series. I said in the series preview that I would be perfectly satisfied with the Cardinals taking three of four and that remains the case. Just look at that cover photo above – these people will be fine.

And to the mothers, I hope you all have the most wonderful day. Goodnight.