The Cardinals begin a four game series against the Brewers in Milwaukee to continue the road trip. Carlos Martinez (3-3) will head out to the mound to try and get his season back on track after several not-so-great outings in his post-lat strain career. Lefty Brent Suter (7-4) pitches for the Brewers. He’s coming off a decent start in Philly. My totally arbitrary prediction is that after three dramatic, back and forth games between the Phillies and the Cardinals, tonight we’ll see a less exciting game, won somewhat comfortably by either team. Bader makes the start in right, and Gyorko and Muñoz are in at the middle infield.

Marp takes the first pitch he gets and banks it off that big blue hitters eye in center, demolishing his thirteenth homer of the season. In the last 31 days, that’s ten homers for Marpenter. I settle into my seat, looking forward to a good game. To follow that, Pham strikes out swinging at three pitches, Jose Mart strikes out, and Ozuna grounds out.

So Carlos gets Thames to ground out to start the game, but Yelich and Cain get on with back-to-back singles. Travis Shaw comes in and strikes out on a well placed fastball. Hopefully a sign Carlos is getting more comfortable. What happens next though, was unsettling and horrific. Jesus Aguilar crushes an apparent three run bomb, as Ozuna jumps up and holds on to the wall to somehow try and rob an apparent home run, but back in reality the ball bounces much lower off the fence…

I have provided the following illustration to show where Ozuna was at the moment the ball hit the wall.

Alright so two runs scores and Aguilar cruises in with a double. Villar strikes out, inning’s over and it’s 2-1 Brewers.

Molina, Gyorko, and Bader all go down on balls in play. Suter is certainly settling into a groove.

Despite allowing a big double to Manny Piña, Carlos gets out of the inning with no further damage. He’s at 33 pitches after two.

Suter retires Muñoz, Carlos, and Marp (a la punchout) and gets through his third inning at just 29 pitches.

Carlos started off his half inning with three balls to Yelich, but he turns things around and gets Ole Yelich to ground one right back at him. One out. Cain comes up and hits a grounder to Marp, who can’t pick it on a tough hop, and is assigned an error by God himself. Somewhere about now Jim Edmonds says that if you’re a baseball fan (as opposed to a “hairstyle fan”), your favorite Carlos Martinez haircut would be the “plain one”. Oh no Jimmy you just distracted me and now Travis Shaw is crushing one into the gap and Cain is scoring. Carlos regroups and responds by striking out Aguilar. Unfortunately Carlos skips one by Molina and Shaw advances to third on the wild pitch. Immediately after, Carlos just lets it slip and tosses a ball into foul territory, allowing Shaw to score. The second wild pitch will probably end up on some kind of horrible pitches compilation video on youtube by season’s end, and I have provided a graphic of where that pitch ended up. Keep in mind it didn’t bounce off the backstop or anything.

Villar ends up walking. Carlos tries to pick him off and Jose can’t glove the throw and now Villar is on second. Sogard flies out and the Cardinals temporarily escape from some form of baseball hell trailing 4-1.

Pham and Martinez fly out, and Ozuna strikes out swinging. Suter is attempting a Shelby Miller perfect game through four, folks.

Carlos AGAIN starts off the inning with three straight balls, before allowing a home run to Piña. Carlos missed his spot and just let one go right over the plate. After retiring the pitcher, Thames singles, Yelich walks, and then Cain slashes a single and drives in another. On a late timeout call, Carlos stops in his motion and lets the ball slip straight up. Things are really looking ugly for the Cardinals and especially for Carlos. Shaw drives in one more with a sacrifice fly, and the Brewers are up 7-1. Carlos is up to 92  pitches through four.

Molina starts off the inning by getting plunked and the Cardinals have their first base runner since the first pitch of the game. Eventually Muñoz doubles him in! The rally is happening! Just give ’em some time! Fowler comes in to pinch hit right-handed. Maybe Matheny knows something we don’t. Nope. Groundout, three outs, and the lead is cut to 7-2.

Brett Cecil into the game to pitch here. Cecil retires the first two he faces, walks the next two batters, and proceeds to saw off Thames to induce a weak pop out. Two straight days with scoreless innings! Lookin’ good, Brett.

Marp, Pham, and Jose all ground out.

Here comes John Gant. He was maybe called up to take a few starts for Wacha but he’ll pitch tonight instead. Yelich and Santana both strike out (Cain left the game reaching for his hamstring.) Gant cruises through his first inning back up from Memphis.

Ozuna strikes out, but Molina draws a walk. With one man on, Rob Manfred reminds the Cardinals to speed up the pace of play, so Gyorko and Bader both pop out on one pitch each.

Aguilar leads off with a weak grounder through the shift. Gyorko is fed a double play ball but boots it and now we’ve got two on for the Brewers. After two fly outs, Piña hits an even weaker infield grounder, but by the time Marp has it, the runners are all safe. Thames crushes one to center, Pham runs back at the wall, jumps, and the ball bounces out of his glove and Thames has himself a triple. Three score. I don’t expect any of the  outfielders the Cardinals have to always rob a home run or make amazing plays like that, but it would be great to step up and stop the bleeding. Gyorko is then given a redemption shot with another ground ball, but he throws it very low and Jose can’t pick it. Thames scores and Yelich goes to second. Jedd’s given his second error of the night. Poor Jedd. 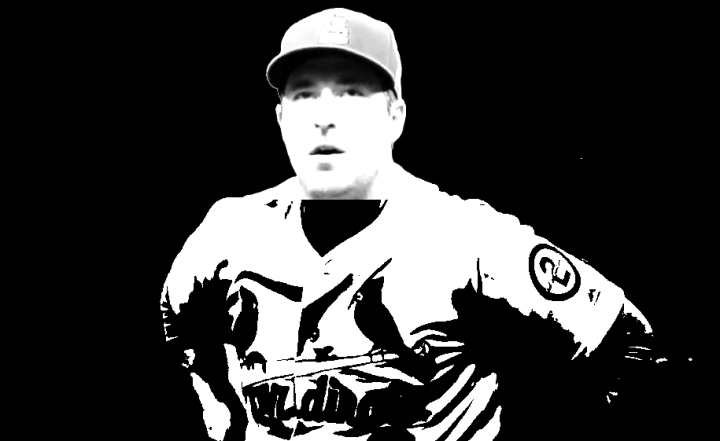 So garbage time ensues, but Cardinals fans are treated to back-to-back singles by Muñoz and Garcia! Marpenter walks! Bases loaded and no outs. Pham strikes out on a full count, and then Jose grounds into a double play. Very sad and mean to tease Cardinals fans like that…

Now pitching for the St. Louis Cardinals, GREG GARCIA. Making his pitching debut, Garcia immediately gives up a single to Shaw, who hit one to the opposite field against an extreme shift where all four infielders were on the right side of second. If I were Greg, I’d never let them put on one of those newfangled shifts when I was pitching ever again. Greg gathers his composure and gets Aguilar to ground into a double play. Greg touches 64 on the gun as he gets Villar to swing and miss at one of his pitches, and subsequently retires him on a fly out.

OK, so I have to write about this too, I guess.  Jedd doubles with two outs, and is driven in by Muñoz who is having a good game with the bat and hasn’t made any misplays on the field unlike his counterparts. Dan Jennings then retires pitcher Greg Garcia to end the game, 11-3 Brewers.

Thanks for making it through this whole recap with me. It was one of the worst Cardinals games in recent memory, and I can’t say I expect things to turn around quickly for the Birds, but here’s hoping they do.