The Cardinals look for the four game sweep of the Nationals, who today are a below .500 team. Luke Weaver will face off against TanNer rOark. I’ll be reporting live from the game, which I’ve never done, so we’ll see how it goes his toes.

Things started off well for Weaver as he embarrassed Adam Eaton by inducing ultra weak contact, but a Trea Turner single and a tragically untouched by fan interference double by Bryce Harper brought home a run. Shildt had some discussion with the umps, but he hasn’t been managing long enough to convince umps to declare doubles outs.

Carpenter blasted the first pitch to the track, but no further and I’m sad. Molina just hit one to the same place, ef. I’m feeling good about the next inning.

Weaver fell behind Zimmerman 3-0, but struck him out on the next three pitches like a total badass. Daniel Murphy was quickly dispatched via embarrassing soft ground ball. Too bad they don’t have exit velocity readily available to fans at Busch Stadium.

Ugh, Rendon almost threw away a groundout by Ozuna but Zimmerman saved him from disgrace and got back to the bag in time corralling the wild throw. The next play, Rendon hunkered down and made the play on a DeJong grounder. Cards can’t get anything going.

Tanner Roark committed the atrocity of singling up the middle. Eaton was retired, but was avenged by a triage (sic) of singles by Turner, Harper, and Rendon to bring home their second run of the game.

After showing bunt, Bader stepped out of the box, took a big hit of salsa out of his pocket, and crushed a bomb into the Nationals bullpen. Carpenter partook in the mild salsa, as he drew a walk to extend his on base streak. Molina once again drove one deep, but fell short and flew out to the track. I couldn’t make out what he yelled into his helmet, but I reckon next time up he gives it the extra oomph.

Dan Murph hit one deep but Bader tracked it down at the track. Wieters’ pipsqueakian groundout brought up Roark, who should probably be beaned for how well he’s hitting today. I mean uh no don’t do do that, but yeah he hit another single up the middle, so it wouldn’t have hurt. Eaton walked and emphatically tossed aside his bat. Turner then in theory grounded out, but the combo of Wong / Carp failed to make the play properly, and the bases are now loaded. Tyson Ross enters the game to face Harper, and gave up a single which would score two, with the Cardinals losing a challenge on the play at the plate. Rendon then grounded out. 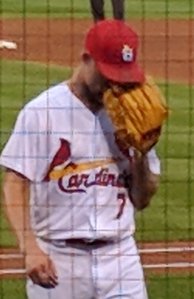 O’ Neil draws a walk to start the rally here in the fourth. Actually nevermind that’s all that happens.

So with no trouble, the first two were put down by Ross, but Murphy nubbed a single. Wieters battled for at least ten pitches , and Roark grounded one to a diving Wong, who couldn’t flip the ball to DeJong accurately. Adam Eaton then dinked one to Tyson Ross, who with the bases loaded couldn’t come up with it, committing the third error of the game for the Cardinals. A run scored, and on the next play, Wong made another nice play, and this time got the ball to Carpenter for the third out.

Bader drew the leadoff walk, but once again the Cardinals went down without doing anything else, including Tyson Ross batting for himself, and popping out trying to sacrifice bunt.

Ross started the inning with the first sick thing since the Bader bomb by striking out Harper. That’s the first K for Ross on the night.

TYLER O’NEIL WITH THE double and yes folks that would be the Cardinals’ second hit of the game, and yes that would certainly be a double attained by hustle.

OZUNA to the track I can’t handle all these fly balls. Two outs, O’Neil gets to third. DeJong keeps things rolling as he slashes an RBI single, and Wong drives him in from first with a double. With the Cardinals cruising along here, the man of the hour Harrison Bader, grounds one softly, and Rendon makes a bad throw in his panic created by Bader’s speed and grace, and Wong scores. The Cardinals pick up three!

Tyson Ross rather calmly puts down the bottom of the order and the Cardinals bats are chomping at the bit to tie the game.

BRETT CECIL enters the game, preceding to throw what has to be one of his best innings of the year, striking out Eaton, getting Turner to hit one to a leaping Bader at the track, and grounding out Harper. Cecil is back and better than ever. I hope. Definitely totally optimistic there.

I don’t think the Cardinals batted in this inning, nothing happened.

Mike Mayers starts things off by giving up a single to Rendon. After a badass strikeout of Soto, Zimmerman singled. Following up that, Mayers got Murphy to strikeout, making Mayers the first Cardinal pitcher to record multiple strikeouts tonight. With men on and Matt Adams lurking in the on deck circle, Wieters popped out to end the inning.

Oh man no Bader strikes out looking on a full count. Good guy Greg lines out to the pitcher. It’s all up to Jose Martinez. AND HE SINGLES! The game is now in the hands of the salsa man. Carp with the brilliant at bat to walk. And Yadi flies out deep again and that’ll be the game.

A disappointing loss certainly for the Cards. Their defense certainly cost them the game, but the good thing is a good series against the the Brewers can keep the playoff push alive. We’ll see ya next time.