More information is almost always better than less and thus the introduction of Statcast data a few seasons ago was a good thing. There was nothing groundbreaking about it per se. A high exit velocity is pretty much the same thing as making good contact, a concept which has been around forever. A good sprint speed is exactly what it sounds like. But Statcast helps quantify this information. We now know who really is hitting the ball the hardest, who’s getting from home plate to first the fastest, and so on. I don’t think this is the most important information in the world, but it’s still interesting and valuable. For instance, Matt Carpenter’s quality of contact per Statcast early in the season might not have foreshadowed a run at the MVP, but it did hint that there really was nothing wrong with his bat.

The drawback to the Statcast age is the urge to only view the action on the diamond through this lens thereby taking emphasis away from what’s actually happening. An example: A lumbering left fielder charges in on a shallow fly and makes a diving catch to prevent a hit. Okay, neat. It’s always an impressive athletic achievement when a player flails his body into the air with the result being a positive play for the defense. Well, that is until Statcast comes along and explains that this play actually results in an out 85 percent of the time. That slowness of the fielder, or an initial bad route, or whatever, is what necessitated the dive in the first place. Therefore, the play was not that great, the player does not deserve your praise, you should feel ashamed for enjoying the highlight as much as you did. Your retweets now look silly.

But that’s antithetical to why most watch sports in the first place. We want to be entertained, we want to see plays that are visually stimulating to the naked eye. And besides, I’d argue that it’s more admirable when a slow outfielder gives everything he has, or corrects his bad route on the fly, only to make the catch that the more physically gifted outfielder makes without breaking a sweat. It doesn’t make Player A a better fielder than Player B, the opposite, in fact, but we shouldn’t denigrate Player A’s effort either, or feel bad about enjoying an entertaining moment during a baseball game.

And that’s what has been so great about watching Harrison Bader the last few weeks. You don’t have to worry about any of this stuff because the defense, the speed, everything you see is real. He’s tied for the most four or five-star catches (Statcast’s measuring system of catch difficulty) with Billy Hamilton, and he’s measured as one of the fastest players in all of baseball. He’s visually stimulating on the surface and the data reassures that our eyes aren’t lying to us.

During Saturday’s game against Milwaukee, Bader plated two on a line drive to the gap in right center. Off the bat it had extra bases written all over it – even Yadier Molina probably would have made it to second – but it didn’t feel like a triple. That is until Lorenzo Cain played the ball pretty competently off the wall, hit the cutoff man near second, and Bader was nowhere to be found. For a split, regrettable second, I thought maybe he didn’t make the turn at first before I remembered that Harrison Bader isn’t like most players.

It's not hard to see why @aybaybader recently won the "Heart and Hustle Award." pic.twitter.com/bPu6gd3rL9

Two innings later, he did this:

This is our nightly @aybaybader defensive gem scheduled tweet. pic.twitter.com/iNO5Gnkm4K

I don’t know what Statcast said about these two plays, not entirely sure I care. But based on the data that preceded them, there is some satisfaction when watching plays like this in real time with the knowledge that most players probably aren’t stretching that hit into a triple, or making that catch. That Bader plays the game different than most.

There’s inherent value in all of this, of course. Per Baseball Reference, Bader has been worth 3.8 bWAR in fewer than 300 plate appearances this season. Stretched over 600 plate appearances and we’re looking at an absurd 7.8 WAR. That’s with an OPS+ at 117, so a lot of his value comes from his defense and base running. Going back 30 seasons, here’s the entire list of players who have been worth 7-plus WAR, with an OPS+ of 120 or less (per Baseball Reference’s Play Index). 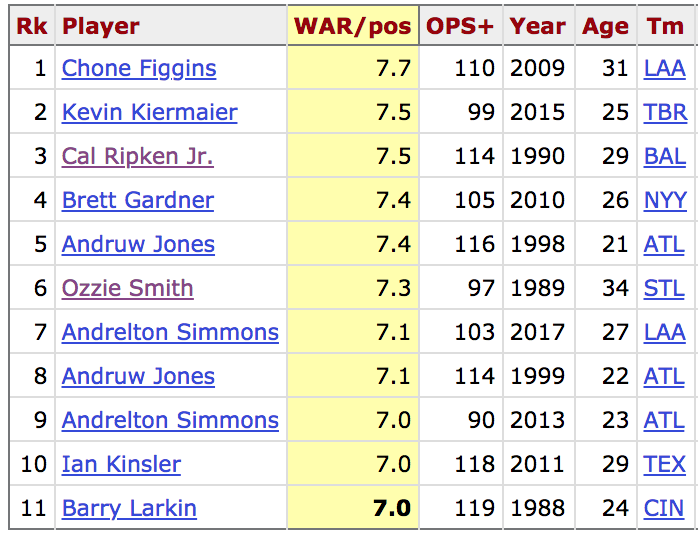 That’s mostly a who’s who of some of the best defensive players in the modern era. It’s premature to think that Bader could put up this type of production over 600 plate appearances, or that this snapshot of a season will be the real Bader going forward, and it should be noted that both fWAR and WARP have him at 2.7 wins above replacement. Regardless, this has been impressive, especially for a rookie and for a player who was never supposed to be this. The players’ notes in the 2017 Baseball Prospectus Annual called him average at best in center field and questioned his raw speed. That’s not to pick on BP, that was the opinion of almost everyone.

But ignoring WAR or how he might project going forward, it doesn’t take long for entertainment value to stabilize, and it’s hard to oversell how aesthetically pleasing it is to watch a player like Bader in this three-true-outcomes era. While “aesthetically pleasing” doesn’t necessarily win games, harkening back to earlier, it’s why a lot of us are putting in the effort to watch a slow-moving game that’s taking place long after the normal world has gone to sleep. Enjoy Harrison Bader strictly in the moment, or enjoy him with one eye focused on the data. You won’t feel cheated either way.