After a four game losing streak, the Cardinals find themselves in a must-win situation.

When your back is against the wall, you focus on what you can control first, which is win one game. Then pray that the Giants help you by beating the Dodgers today and tomorrow to force a game 163. It’s a tall task but like Kevin Garnett once said, anything is possible.

I’d rather have Miles Mikolas on the mound in this situation than any other starter. My concern is how much run support he’ll get.

Despite what happens on the field, this weekend isn’t short of any drama. Keith Olbermann was talking smack about Harrison Bader, only to get roasted by Bader’s response. 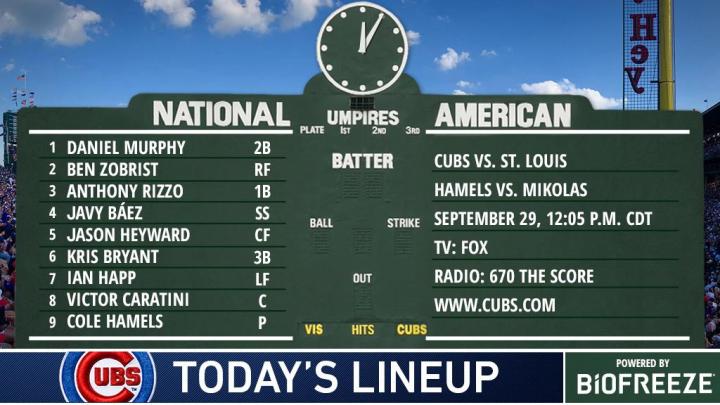 Miles Mikolas was the star of the game.

The Cubs only run came in the first inning. Javier Baez’ fly ball was dropped by Munoz in shallow right field. But Mikolas didn’t let the error faze him. He was poised and calm, consistently hit his spots, gave up no earned runs and never had to pitch out of a jam.

With his eight IP this afternoon, Mikolas reached 200 innings pitched on the season. That’s pretty impressive for a guy we didn’t know much about entering 2018. When Martinez, Wacha and Waino were hurt or pitched poorly, Mikolas was steady. He stayed healthy. He has been the team’s ace, and the main reason why we still have a glimmer of hope on reaching the post season.

What if I told you on first day of Spring Training that Carlos Martinez, Michael Wacha, Adam Wainwright & Alex Reyes would combine for 18 wins in 2018, & Miles Mikolas would be on the mound at Wrigley with a chance for his 18th win in Game 161? Baseball is…..rarely predictable.

As Cardinals Magazine reminded us on Twitter, “He’s pitched 50-plus innings more than anyone else on the team.”

Miles Mikolas, the greatest free-agent signing of the winter, finishes his regular season with a flourish, going 18-4 (if Cardinals hang on) with a 2.84 ERA. He won't win the Cy Young, but he'll get plenty of votes. #STLCards

The offense only recorded three hits, but it was just enough. A timely RBI single by DeJong in the fourth tied the game at 1. Then Carpenter’s single in the fifth scored Bader and the Cards didn’t give up the lead.

Cole Hamels pitched well for the Cubs, but Mikolas was absolutely dominant.

Carlos Martinez came in to get the save in the ninth. It went groundout, groundout, fly out. It was a quick game today with little offense from both sides.

We are still alive. We live to fight another day.