On Wednesday I posted Part 1, numbers 6 through 10, of what I believe are the ten greatest Ozzie Smith baseball cards of all-time. The wordy intro was a nostalgic trip you’re probably familiar with, that collecting baseball cards was once an almost rite of passage for any adolescent discovering the sport itself, only to be done in by the predictable forces who sought bigger profits. It’s now an obscure hobby, existing almost exclusively online.

Back in the good old days though, that’s not how it worked. There were actual baseball card shops. Places where you could rummage through packs of cards and stare at the pricier ones kept behind glass. My friends and I would spend hours at our local shop in the summer, spending whatever money we had but mostly just loitering. We weren’t the clientele who kept the business afloat but the owner didn’t care and he sometimes gave us each a free pack before we left for the day to pedal home. It was paradise.

A bumper sticker from that store is still on the front of the book that houses all of my Ozzie cards.

Check Google Maps and this is what that address and storefront looks like today.

This is not an anomaly as far as baseball card shops go. They weren’t meant to co-exist with the world wide web. And not to be sentimental, but just seeing this deserted building makes me pine for some crunchy wax pack gum.

Anyway, to round out the top ten, here are the five greatest Ozzie Smith baseball cards ever made.

It’s tough to articulate what’s so great about this particular card because really credit goes to the entire set. In fact, 1983 Topps was such a special set that Topps has repeatedly brought back the same action shot + headshot design for contemporary cards as an homage. It’s possibly my favorite set of baseball cards ever produced.

This card can currently be purchased online for $13.99. The seller makes it a point to note that the card has been stored in a smoke-free environment so that’s nice. And speaking of all of these cards with Ozzie batting…

As much as I love 1983 Topps, if you make a baseball card for Ozzie Smith and it doesn’t depict him making a play in the field you should at least have to appear before a judge to show cause. And yet…

These are all of Ozzie’s cards from 1983 and 1984 and only the 1983 Fleer (top row, middle) card depicts him with a glove. I’m not even sure what he’s doing in that picture but at least he has a glove. I’m not picking on 1983 and 1984 either, this is basically how all of his cards looked until Upper Deck showed up 11 years later and got it right. Finally.

I have mixed feelings about Upper Deck. On the one hand, they represent the industry eventually pricing out the younger collector, but to their credit they cared about the photography and they at least stuck with this theme.

This card in gem mint condition can currently be purchased for $25.99. (Note: That seems high.)

Okay, now we’re getting serious. We’ve moved into “cards that are so important they can’t be stored in a lousy book but must be encased in plastic” territory. This was by no means extreme. I had one friend who kept his 1986 Donruss Jose Canseco Rated Rookie card locked in the same chest with all of his dad’s guns.

If you didn’t have Ozzie’s rookie card, the 1980 Topps card was probably the next best thing. It was only the second card made for Ozzie by one of the major manufacturers (Fleer and Donruss did not arrive on the scene until 1981), and was hard to find in good condition. Mine is no exception. There’s some wear in the bottom corner and along the top as well. And if you look closely you can maybe see that I once severely broke my ring finger and never got it fixed but that doesn’t effect the card.

This card in mint condition can currently be purchased for $28.99.

Noted in Part 1 was how slower things moved way back when. For example, baseball cards from a 1987 set showed stats up to 1986. Andre Dawson’s 1987 baseball cards show him with the Expos even though he signed and played for the Cubs that year. Players who debuted in 1987 wouldn’t get their rookie cards until the following year. That’s why Ozzie’s rookie card is from 1979, even though he had 668 plate appearances in 1978.

There were a few exceptions, namely the Traded – note the “T” next to the number – or Updated sets which if I recall came out in the middle of the season in an effort, to, well, update things. This is Ozzie’s card from the Topps 1982 Traded set even though he already had a Topps card that year with the Padres. I’m not sure where the picture in the above card was taken. If you look closely there appears to be football uprights in the background. It’s not an action shot either, so why is this card so special? Because this was Ozzie’s first baseball card as a Cardinal, that’s why. It was also his second most valuable card. At least, back when I was collecting. And, it was a hard find. I finally got mine from a seller at the Logan County Railsplitter Festival probably around 1991. He had a tent right next to the guy who sold those excellent donuts that were deep-fried in a giant cast iron kettle.

This card in mint condition can currently be purchased for $35.00. 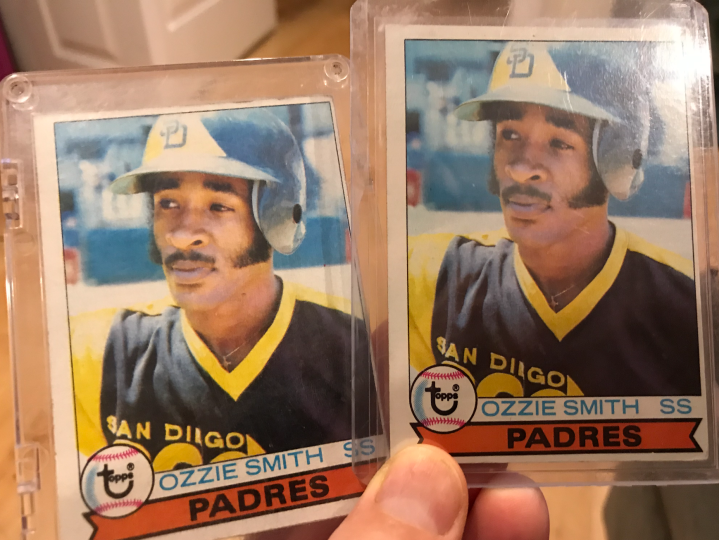 No surprise here. This is the Ozzie Smith rookie card – his only rookie card – and it’s probably the only Ozzie card that ever mattered to non-Ozzie collectors, or the professional collectors as well. Over time I became the proud owner of two of them. My dear grandmother bought me the first one as a gift in 1989. It was worth $16.50 at the time which as a 10-year-old seemed like a fortune. It would remain steady at $16.50 for a while until one day it started to steadily increase. Perhaps this was the great climb before the crash. I was a subscriber to Becket Monthly back then and with each issue the first thing I did was turn to the 1979 Topps section to see how #116 was doing. If I recall, the card eventually maxed out at $120.

And it’s a very weird thing to not even be a teenager and to be the owner of something that was on paper worth more than a hundred bucks and to have absolutely zero interest or intention of selling it. It was never an option. I picked up the second card long after the crash and long after I quit collecting cards when I saw it on eBay for a price that was cheap enough to where I couldn’t resist. I think it was $20.

Part of the mystique of this card, other than Ozzie’s sideburns, was that it was impossible to find one correctly centered. Absolutely impossible. You can see it in the cards above. Ask the pros and they’ll tell you proper alignment matters more to gem mint status than any wrinkle or crease. So if you’re out there, and you do have a correctly centered 1979 Topps, #116, you might want to make your next phone call to an appraiser.

This card in near mint condition can currently be purchased for $179.95.

I suppose one day I will eventually give these two cards, as well as the others to my kids if they feign an even modest interest in them. They are priceless though. Not in the literal or colloquial sense, but in the same way they were when I was 10-years-old. It doesn’t matter if those prices on eBay are reflective of their actual value, or if they’re akin to a legitimate retirement plan, or if they’re worthless. I have no plans to get rid of them and I don’t want to.